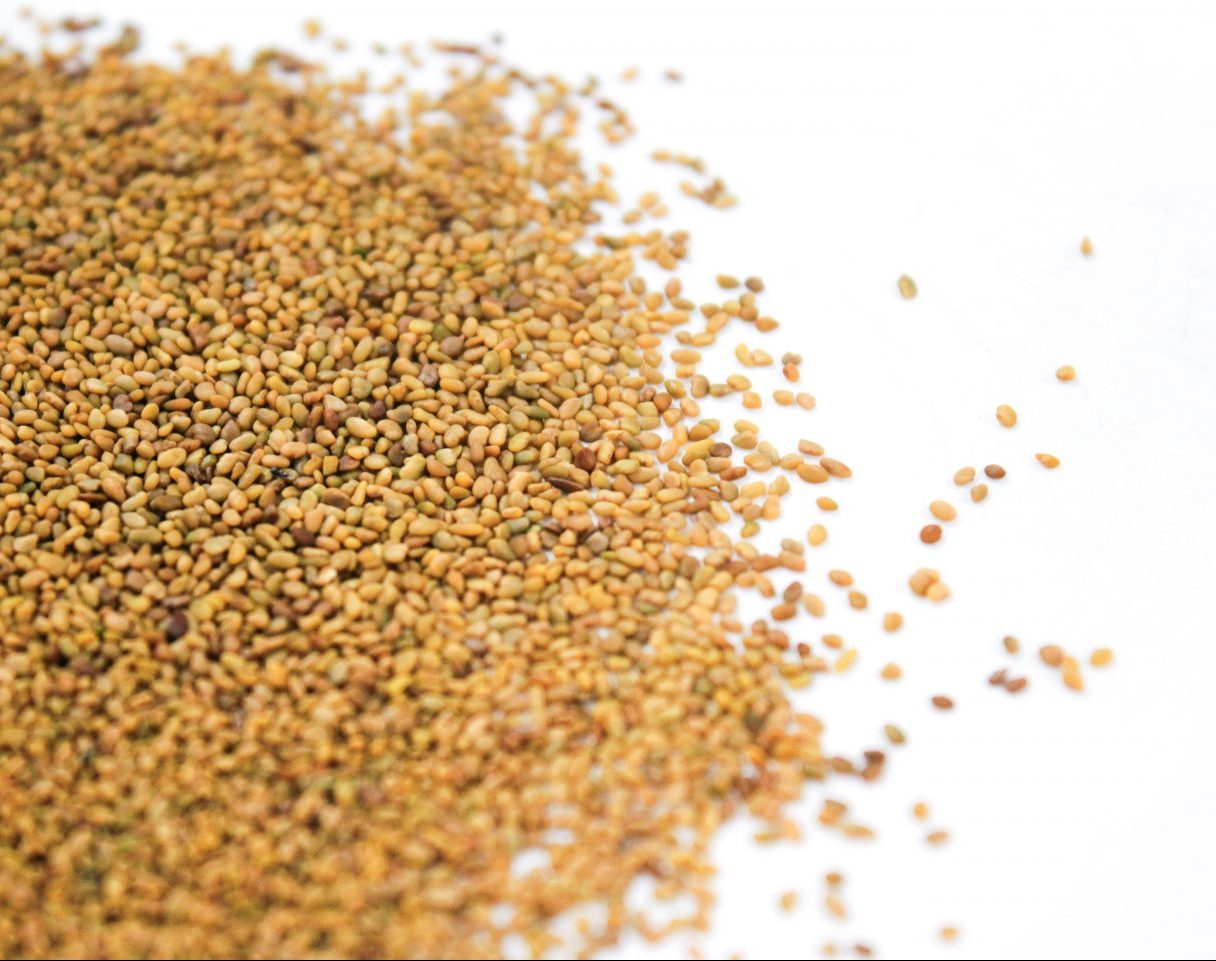 Livestock producers now have access to a new yellow-flowered alfalfa variety. Developed by South Dakota State University (SDSU) to thrive in less than optimal conditions, Sholty exhibits high drought tolerance, is winter hardy and, because of its indeterminate growth habit, this new alfalfa is ideal for interseeding into pasture and rangeland.

“It doesn’t stop flowering, so it stockpiles tonnage in the field,” explains Arvid Boe, Sholty’s breeder & SDSU professor of forage and bioenergy crop breeding in the Department of Agronomy, Horticulture and Plant Science.

Proven in South Dakota test plots in Bison, Pierre and Highmore as well as Sidney Mont., on average, Sholty yields between 2 to more than 3.5 tons per acre.

“This alfalfa is so impressive and beautiful it catches the eye,” Boe explains. “For years, we had test plots along Highway 14 of Sholty, standing waist-high. People would stop and ask, ‘what is that?’ I’d tell them it was alfalfa and they wouldn’t believe me.’”

Due to its persistence, drought tolerance, and winter hardiness, Boe says Sholty is an excellent option for livestock producers in drought-prone areas of South Dakota, North Dakota, Wyoming, and Montana.

“Sholty proved in trials in Bison to be very drought tolerant,” Boe says. He explains that because Sholty is a legume, the alfalfa adds nitrogen to the soil, enhancing the overall productivity.

“When alfalfa is interseeded into depleted range or pastureland it changes the productivity. It adds high-value protein to the forage mix that is digestible,” Boe says.

27 years in the making

Boe began selecting for Sholty alfalfa nearly three decades ago. He was asked by U.S. Fish & Wildlife Service and Pheasants Forever to develop an alfalfa variety livestock producers could interseed on range and pastureland for grazing or leave in the hayfield until mid-July.

“They wanted alfalfa that wouldn’t stop producing so producers could let it stand in the field, so pheasants could hatch and raise their brood before it needed to be cut,” Boe explains.

He began the selection process by analyzing the falcata sub-species of alfalfa.

Known for its yellow flowers, falcata is favored by ranchers because of its ability to produce high amounts of forage early in the growing season with little moisture.

The falcata alfalfa Boe analyzed was very similar to that introduced to South Dakota in the early 1900s by famous SDSU Horticulture Department Head and USDA Plant Explorer, N.E. Hansen. In fact, several of the parental plants, in Sholty, are descendants of Hansen’s original introduction.

Observing its winter hardiness and drought tolerance, Hansen brought it over from Russia. “It’s very persistent. A rancher from Lodge Pole began interseeding falcata into his rangeland 30 years ago after finding a patch that had been growing on his land since 1915 when his great uncle got the sample from N.E. Hansen.”

It only took Boe four years to selectively breed alfalfa that would meet the criteria necessary to provide livestock producers with a more hardy, higher-yielding, persistent and potato leafhopper tolerant alfalfa variety, while at the same time meeting the habitat goals set out by the U.S. Fish & Wildlife Service and Pheasants Forever.

But then, he faced an obstacle. “In 1996, I had 41 Sholty plants that I took to seed multipliers, and they couldn’t get more than 2 pounds of seed from an acre of plants.” The industry standard for yellow-flowered alfalfa is about 200 pounds of seed per acre.

About a decade ago, Boe thought to reach out to Millborn Seeds, a Brookings and Rapid City-based seed company. Boe asked if they knew of a seed multiplier that could successfully put Sholty into production.

Millborn Seeds contacted a Montana seed grower. “This was a unique product, but our longevity and reputation as a staple in a small niche market industry, allowed us to have the knowledge and know-how to get us to the right place,” says Matt Metzger, a cattle producer, and Forage Specialist with Millborn Seeds.

Today, Millborn Seeds’ warehouses are stocked with a limited supply of Sholty. “This was a case that took collaboration between university and industry to bring this seed to the public,” Boe says. “They are the grass seed specialists. They know where seed producers are growing grasses and forbs no one else can grow.”

Making Sholty available to livestock producers is a career highlight for Boe, a ranch kid from eastern Montana. Boe has worked as an SDSU plant breeder since 1980.

“I am optimistic that Sholty will have a positive impact on ranchers. Getting the seed into the hands of the producers, that is the true test of what we’ve accomplished,” Boe says.

Interseeding alfalfa is best done in early spring or late fall when existing grass is dormant. Metzger said for those planting new pasture or working on restoration projects, Sholty can be planted with native and introduced cool-season grasses.